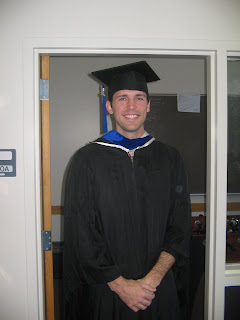 Hooray! Our son Jerry and friend Blake Bickmore are is here visiting. Jerry just graduated from BYU with his Masters of Accountancy! He goes to work September first for Deloitte Touche in Dallas. In the meantime he is studying for the CPA exam. He will remain in Provo, Utah until August. Congratulations Jerry!
Posted by Gemie at 9:51 AM 3 comments:

Well, it has certainly been a long time since I posted anything. Time goes by so quickly here in the mission field. It seems like you just need to keep swimming or you will be swept away. President Martin continues to work on wonderful trainings for the missionaries. He leaves tomorrow for Sacramento and the interim Mission President's Seminar. We were delighted to hear the name of our former Stake President and good friend Elder Jerryl Garns named as our new Area Seventy in the recent General Conference. He will be at the seminar with Jerry. He is over our mission's coordinating council (Stake Presidents and Mission President) and the Ventura one. He has a wonderful wife Mary Lynn who is a good friend to us as well. We are so lucky to have them.
I am focusing strongly on safety and health issues. Each missionary is supposed to have an "earthquake bag" by their bedside. Sister Siv Flick (who lives near the mission office) has a bunch of volunteers who help sew drawstring bags and supply contents for them. Each one comes to us with a pair of work gloves (to keep hands safe and able to clear glass), a flashlight with batteries, and a whistle (to signal your location if trapped in rubble). The missionaries are supposed to add in two to three bottles water and a small first aid kit. They have the option of putting sturdy shoes in the bag, or sleeping with the shoes near their bed. The bags in the past have been assigned to the area and left there for the next missionary who comes. This has posed several problems. No one seems to have ownership over the bags. Contents and bags are missing. One bag was filled with Halloween candy (the Elder had obviously attended his ward's "trunk-or-treat"). Another was filled with flag football equipment. The only thing left of the original equipment was the whistle. (I think we all agree on which Elder we would rather be stuck with in the event of a disaster.) I just finished getting the name of each missionary ready to attach to their bag. It is in a little plastic pouch with a California San Fernando Mission Emergency Plan pamphlet that I modified from the one they were or are using in Quito Ecuador. Sister Granados, a native Spanish speaker, and her companion Sister Sorenson, helped me get the changes I made translated into Spanish. The native Korean elders will have to make do with English for now.
Adam is lamenting the demise (or should I say demolition) of Texas Stadium. He feels it should have been turned into a Cowboys museum. He just sat for the ACT last Saturday. Then he went to an Angels game that night with Spencer and Camie and their two boys. On Monday night he and President Martin went to a Mavericks/Clippers game complements of Brother Lamb from our Stake who I think is the CFO for the Clippers. Adam came downstairs in his Dirk Nowitski shirt with his Mavs noisemakers. Jerry told him he may need to re-think his choice of clothing being a guest of the Clippers. He put a shirt over the Mavericks shirt. I noticed it was no longer on when he came home. It's hard to suppress a true blue Mavericks fan.
We enjoyed Camie and the boys most of the weekend. They are so fun. We missed Spencer because he was home ill. Ben had a lot of fun. He was given the choice to come here or go to Disneyland. He chose us!!! He informed his mother he wanted to go to "Gam-pa, Gam-ma's."
All our grand kids are so adorable! We got a call from Ashlin Boren (who will be five years old in less than two months) this past week. She sounds so grown up.
We love hearing from our friends! If anyone knows Christopher Sample's (or his parents)address, please get it to me! I am thinking his parents moved since the last address I have for them.
Posted by Gemie at 10:17 PM 4 comments: